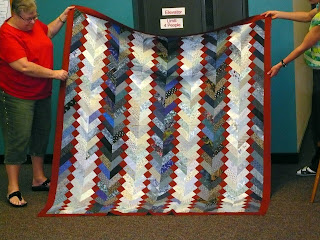 This is where I am on the Texas Braid. I wanted to make a large throw, so I don't want it much bigger than this, but I do think it needs another border. I thought I wanted a blue with cinnamon, but I don't have anything that goes. The ladies in my "late night" group think I should go with a dark blue and I think that would work if I have anything in the right color.

I haven't had much time to work on it, so maybe this week . . .
I'm starting to battle seasonal allergies. Is anyone else?
I'm linking this to Judy's Design Wall Monday to see what everyone else is working on. I know I spend a lot of time each week getting inspiration from all the shared projects!
Posted by Jeanne in Ohio at 9:03 AM 10 comments: Links to this post 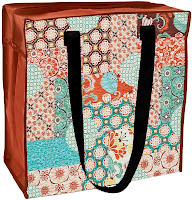 I’ve been reading about the Great Copyright Controversy between a famous designer, a publishing company and a quilt book author and I think Leah’s post here nails all the issues, plus her own unique perspective. Here is mine.
I’ve been noticing as I surf the net lately how many bloggers seem to be hooked on using designer fabrics in their quilts, and often they’re using a single line. That’s a design decision, and certainly every quilter has a right to use the fabrics she loves, but I wonder where this came from? My theory is this is something promoted by the fabric companies to sell more of their wares. Where I might pick 1 or 2 from a line, some people go in and buy everything in it. That could be 20 or 30 fabrics in all the colorways. A plus for doing this is that the quilter can be sure all the colors go together.
I don’t want to do that because I’m a scrap quilter and I want a lot of variety. I’ve spent 20 years building my stash so I can have choices. If I want blue, I have a bunch. The same with reds, oranges, yellows, greens and so on. I love the modern fabrics, but I’m just beginning to add them into my stash and I couldn’t do a so-called modern quilt if I wanted to. I love the look but I don’t have those fabrics. If I see a modern quilt that I love, I’ll interpret it in the fabrics I have.
Now, I doubt I’ll be adding those designers into my stash. I’m highly offended that a designer could imagine that she has a right to limit my use of a product I’ve purchased. What is that fabric company thinking in agreeing to such a restriction? I’m not going to promote her wishes by naming her here. I’ll never buy her fabric, and that’s too bad. I like her designs.
The controversy had its roots in a promotional tote bag which was to hype a book, “Scrap Republic,” by Emily Cier for C&T Publishing. Moda, a very large, popular fabric company, sent fabric to Emily to use in the book, including the line of fabric by She Who Doesn’t Want Her Fabric Used (SWDWHFU). I haven’t bought the book, so I' haven’t seen the quilt in question, but C&T admittedly took one of the book’s photos, cropped it to show off the fabric and used it on the tote. The apparently insecure (or greedy?) SWDWHFU took exception to the tote’s use of her fabric, hired a lawyer and everything quickly went to Hell in a handcart.
This is all public record. It’s all over the quilting blogosphere. I decided to weigh in because I think the whole thing stinks. I’m upset primarily with SWDWHFU, who isn’t happy getting a contract with a major fabric company and all the accompanying money, prestige and fame. She also wants to control the USE of the fabrics which she’s designed. She actually has a restriction printed on the selvages of her fabrics saying it can only be used for personal use! She claims it’s the only way she can protect her livelihood. Baloney!
I think the fabric company, Moda, is also to blame, even though they haven’t been part of the discussion. They obviously agreed to her demands limiting the use of the product they’re trying to sell. I think they were so eager to sign a “hot” designer that they failed their customers. Shame on them!
I do not blame the author, Emily. She used the fabric Moda sent to her for inclusion in the book in good faith. The use of a single line of fabric in a quilt is pretty common now, and I’m sure she thought nothing of it. Also, she had no control over the publisher’s use of a promotional image from her book in the tote bag. The fact she didn’t identify the fabric in the book isn’t unusual, either. I haven’t seen it in other books. Besides, it’s doubtful anyone could get that fabric by the time the book came out anyway, considering the time lapse between the design, sewing and photography and the release of the book.
Some other posts on this topic here, here and here. A picture of the offending tote is here.
A lot of valid questions have been raised in other blogs, but I felt a need to have my say, even if no one but me reads it. If you happen to read this, I’d appreciate your feedback.
Posted by Jeanne in Ohio at 2:42 PM 2 comments: Links to this post