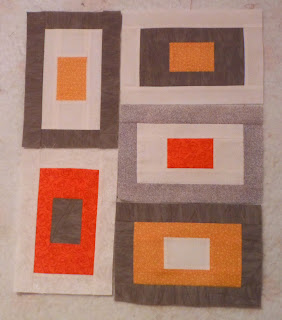 As usual, I'm in the latter part of the month posting this. I originally made these blocks when I was at Quilt Camp, but they didn't turn out the right size. That won't do for Block Lotto.

Not to be confounded by such a simple block, I decided to make a better effort and re-did them. They're good now!

The challenge was to use a white or white-on-white, a gray and another color in each block. They're to finish 6 by 9 inches. I'd REALLY like to win a bunch of these!

Posted by Jeanne in Ohio at 6:53 PM No comments: Links to this post

﻿﻿
My to-do list for February had five items on it, and I only completed two of them. In my defense, however, I completed two additional knitting projects, so I'm not feeling too bad about my productivity.  Also, I rearranged my sewing room and had a week of vacation in Arizona and finished three books. The sewing room project took way more time than I ever imagined! Combine that with getting ready for vacation and I missed two weeks in my sewing room!

The sewing room saga began late last year when I began looking for a sturdier cutting table. The one I had was a cheap one from JoAnn's and it was pretty wobbly. The glue holding it together had dried and the top flipped up if I wasn't careful about there I stacked my fabrics. I looked at several options and decided on two sturdy work tables from a mail order catalog. I wasn't planning on this project until April because of some commitments, but DH ordered it as a surprise and I got them in early February.
Needless to say I had to scramble to clear out space for them. In doing so, I nearly emptied the room. The tables are assembled and in place and I love them! They measure 48 by 30 and I have them back to back so my work surface is 48 by 60 and there is absolutely no wobble now.
While re-assembling the room, I also decided to move my sewing machine so I could see something besides a wall while working. I think I'm really going to like this new arrangement. I've only sewn for a few minutes so far, but it's going to be nice to look up and see the trees outside my window.
While putting the room back together I've come across a whole bunch of stuff I forgot I had, including some projects! That's a bummer. Now they need to go onto the UFO list. So many projects; so little time!


All this is justification for failing once again on my to-do list. Let's see where I stand. My February commitments were: 1. finish sewing and get Christmas Diamonds to Michele for quilting. Not done, but very close. I cut the backing yesterday and will have that together as soon as I get off the computer. 2. finish Texas Braid. Done on Feb. 4th. 3. finish the blue socks I discovered while looking for something else. Done. Blogged about here. See photo above. 4. layer and quilt Sophie's Butterfly. Not done. This won't happen in March either. 5. Block Lotto blocks. Not done, I wasn't feeling the love and didn't have my room in order to sew until yesterday. That was a very low priority anyway because I wasn't feeling the love for the block in the first place.
The two additional projects that I knitted were a ruffle scarf and a pair of socks for the two lovely women who hosted us on our vacation. The socks are the in-progress shot above. I used two strands of Heart and Sole to make a worsted weight pair that I'm sure will keep her feet warm. The colors reminded me of the red rocks near Sedona. The ruffled scarf was from Sashay in wonderful teal colors that happened to match her jacket perfectly!
I knitted that in the car while traveling from near Phoenix to the Nike Missile Museum near Tucson. (Fascinating place! Go if you get a chance.)
The books I read were "Agenda 21" by Glenn Beck, "Across Many Mountains" by Yangzom Brauen and "After the Rising" by Orna Ross.
Beck's book is a chilling look at the future if the environmentalist agenda is taken to the nth degree. It's a world without any modern conveniences where there is no electricity, animals have more rights than man and The Authority dictates citizens' every movement.
"Across Many Mountains" tells the story of a devout Tibetan family and their harrowing journey across the Himalayan Mountains, their travails in India and ultimate settlement in Switzerland. This was a book club selection that I cannot say I liked, but that I'm glad I read. The narrator is the granddaughter of the parents in the trek. She shares a lot of information about the Buddhist religion which I found fascinating. It's really hard for this independent American woman to understand the Tibetan deference to authority which her parents exhibited, but that seems to be a big part of both their culture and religion.
One of her motive for writing the memoir is to promote Tibetan independence from China which invaded the country 50 years ago. It seems very unlikely that that could ever happen after all this time.
The third book, "After the Rising," I read on my iTouch. It was a freebie in the Kindle store and I had no idea what to expect. The story is of an Irish expatriate who returns from San Francisco to her hometown for her mother's funeral. In the ensuing weeks, she is given a suitcase full of papers from her mother's and grandmother's lives. While dealing with her own problems, she digs into the stash and finds out how involved her grandmother, Peg, was in the Irish struggle for independence from England. Ultimately I found the book frustrating because it's obviously the beginning of a series and the cliff-hanger ending did its job: keeping me in suspense. Do I care enough to buy the second book? I don't know.
This has gotten extremely long, so I think I'll post later about my goals for March. Stay tuned!
﻿﻿

Posted by Jeanne in Ohio at 10:05 AM No comments: Links to this post